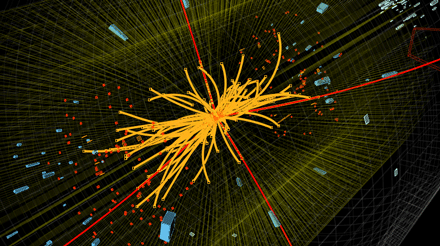 Four years ago, the Higgs boson was officially declared an established subnuclear particle. With that announcement, an over 40 years long search finally reached its conclusion. But that day, July 4th 2012, also marked the start of a new epoch: the one of Higgs boson studies.

What we know about the Higgs boson, four years into the Higgs studies era, is a lot. We know, for instance, that its mass is of 125 GeV, give or take less than half a GeV. We are quite confident that it has null spin and positive parity, as END_OF_DOCUMENT_TOKEN_TO_BE_REPLACED

The reader be warned: this post does not contain any physics, and is rather about how a physicist fights for some space and time for himself and his family, decoupled from his daily occupations, and hopefully lowers his stress level.

I left my home in Venice on June 15th at four in the morning with my fiancee and my two kids (Filippo, 17 and Ilaria, 13 years old), headed  to Elafonisos, a tiny island in southern Greece. Our Volotea flight was due to leave the Marco Polo airport at 6.30AM -an early and cheap flight I had picked to ensure END_OF_DOCUMENT_TOKEN_TO_BE_REPLACED

“A good physicist is able to communicate”

These the words of Fernando Ferroni, president at the National Institute of Nuclear Physics (INFN) in Italy, on occasion of his talk at the 7th International School of Science Journalism in Erice this week. Together with other 40 fellows I had the great pleasure to attend this school around the theme “Fundamental Science: From cutting edge technologies to the heart of society”. END_OF_DOCUMENT_TOKEN_TO_BE_REPLACED

Between passion and rationality

My name is Cecilia Tosciri, I am the ESR of the AMVA4NewPhysics network selected for the position at the University of Oxford. Since you will hear from me and my work for a while, let me introduce myself and explain how I ended up in this exciting project.

I graduated one month ago at the University of Pisa (Italy), the city where I was born and raised. I’ve always been a very curious person. When I was a child I started to understand that the human brain is the most powerful tool in our hands and I decided to use it in the best way possible. I started to think a lot about END_OF_DOCUMENT_TOKEN_TO_BE_REPLACED