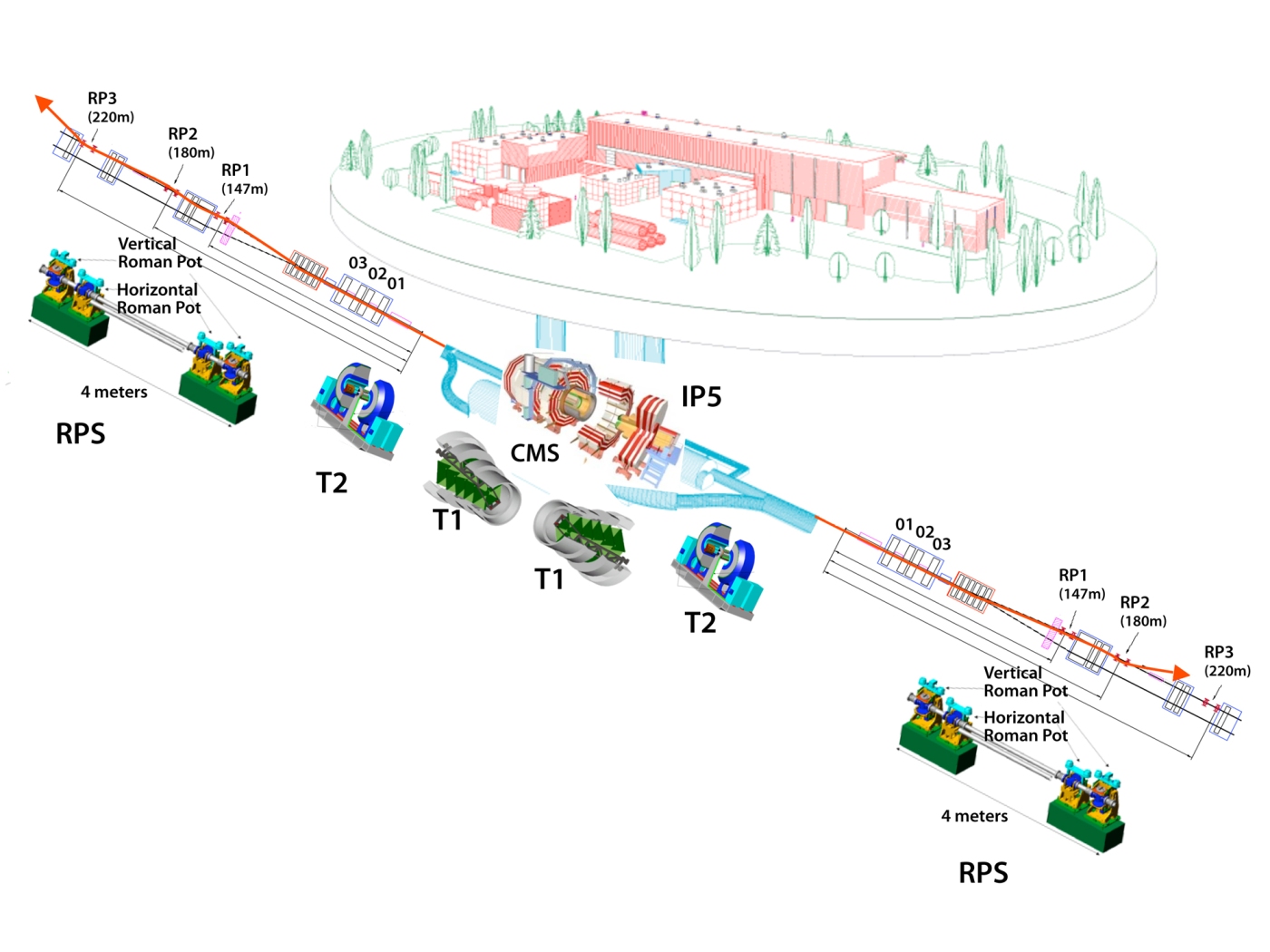 Continuing on from my last post, in which I described part of the service work I am doing in the CMS experiment, I’ll now give an overview of the second project I work on, which takes place in the context of the CT-PPS sub-detector of the CMS experiment.

CT-PPS, located on both sides of the main bulk of CMS some 200 metres from the interaction point, stands for CMS-TOTEM Precision Proton Spectrometer. The experiment is a joint projectbetween the CMS and TOTEM experiments; the former concerned with exploring new physics, the latter with measuring the cross-section (effective rate of occurrence) of elastic scattering. CT-PPS aims to study events in which the colliding protons interact only slightly and remain intact, but produce some particles which travel down the LHC beam-pipe at only a narrow angle from the beam; hence why the detectors are placed so far from where the collision occurred.

The LHC is ring-shaped, and powerful magnets are used to bend the trajectories of the protons as they accelerate round. In the case of only a slight interaction between two protons, one will gain energy and the other will lose some. This means that the two protons will be bent along paths different from those that other protons will travel along, and they end up exiting the ‘beam envelope’. The CT-PPS detector effectively uses the LHC magnets as a spectrometer and measures the paths of these affected protons, allowing researchers to search for the production of new particles and measure fundamental parameters of the Standard Model.

The detectors are placed in housings called Roman Pots (RPs), which can be moved in and out of the beam pipe, preventing them from being damaged before the LHC beam is stable. When inserted, they reach about 10-15 ‘beam sigmas’ away from the centre of the beam (perhaps ~0.5 cm; very close!). Knowing the position of the detectors with respect to the beam is vital to taking useful data, since the protons will pass through multiple detectors. If the detectors are not aligned, the trajectories cannot be properly reconstructed. Unfortunately, the easily accessible position estimations are not precise enough, and a more thorough measurement is required to properly align the detector modules.

The alignment process is actually three steps: First, the RPs are inserted until they just touch the beam, providing a rough starting point. Next, the relative alignment of the RPs can be established; by utilising overlaps in the coverage of the detectors, the positions of the RPs with respect to each other can be established. The final step is then to determine the position of the detectors with respect to the beam. This is the part that I was involved in.

This ‘absolute alignment’ involves using pairs of elastically colliding protons, which are deflected symmetrically above or below the beam. Protons appear as ‘hits’ in the detectors, and selecting out the elastic hits involves first requiring matching hits to be found in the detectors either side of the collision. Next, variables can be constructed, motivated by knowledge of the optical properties of the beam. Cuts can then be applied to these variables by analysing the distributions and looking for correlations. Having selected out the elastic hits, we are then able fit to the density of elastics hits either side of the beam. The centre of the fitted distribution then corresponds to the beam position.

As I write, this alignment process has been completed for the data taking this year, and this afternoon I will be presenting the results to the rest of the experiment. This time I was working under the supervision of a researcher named Jan Kaspar, who helped develop the alignment procedure as part of his PhD thesis. Having understood how to apply the procedure, I will move on to repeat it on some 2016 data samples, and later on new data.

Whilst service work in CMS is normally expected to align (pun slightly intended) with one’s main analysis, this task is outside my normal work (Higgs physics and machine learning), and so was a chance to learn a bit more about the other experiments in CMS. I had thought about trying to improve the elastic selection, perhaps through some clustering algorithm or dimensionality reduction process. However, given that the selection is motivated by analytical properties of optics, it is unclear whether these changes would actually be improvements, or if they would merely obfuscate the selection process.