Muon G-2: The Anomaly That Could Change Physics

Do you remember the infamous “g-2” measurement ? The anomalous magnetic moment of the muon has been for over a decade in the agenda of HEP physicists, both as a puzzle and as a hope for good things to come.

Ever since the Brookhaven laboratories estimated the quantity at a value over 3 standard deviations away from the equally precise theoretical predictions, the topic (could the discrepancy be due to new physics??) has been commonplace in dinner table conversations among HEP physicists.

Similarly, no self-respected “global fit” of standard model observable quantities or scan of allowed parameter space of supersymmetric theories has omitted to consider the constraining input coming from the tension between experiment and theory on the muon anomalous magnetic moment.

What is causing the over 3-sigma discrepancy? This question is important because of the possible answer: new physics such as light supersymmetric particles or other things potentially at reach of experimental discovery at colliders could easily affect the value of g-2 and provide an explanation for the effect.

Of course, the difference could also be due to mundane effects, such as a unknown systematic uncertainty in the experimental determination, or a mistake in the mind-bogglingly difficult theoretical calculation. Who writes here believes that indeed, either the latter or the former, or both, are the cause. But like it or not, the observed discrepancy is the most notable and long-standing effect that could herald the coming of new physics.

g, or rather, g_mu, is a constant that describes the magnetic moment of the muon. Elementary particles of unit charge endowed of spin were postulated to have an associated magnetic moment as early as in 1925, by Uhlenbeck and Goudsmit. They proposed the following formula:

with g=2. Above, μ is the magnetic moment of the particle, e is the charge in electron charge units, m is the particle mass, c is the speed of light, and σ is the vector describing the particle spin, which for elementary fermions takes the value of h/4π , where h is Planck’s constant.

The electron magnetic moment had to wait until 1948  for its first determination (by Kusch and Foley): those guys found that for the electron, g had to be 1.00119+-0.00005 times larger than 2. The first triumph of the newborn quantum electrodynamics (QED) was in fact the theoretical determination of that factor, by Schwinger. By calculating all quantum loop effects influencing the “electron-photon vertex” -the point where an electron emits or absorbs a photon- he found that the factor had to be equal to 1.00116, in great agreement to the measurement. There is thus an “anomalous” contribution to the magnetic moment, due to quantum effects.

Quantum loops are virtual processes that affect a particle’s propagation in vacuum. An electron, for example, may emit and immediately reabsorb a photon as it moves in spacetime. The emitted photon, before it is reabsorbed, may in turn transmute for an unmeasurably small instant, into a virtual electron-positron pair. And so on. These processes constitute modifications to the behaviour and the properties of the original particle (such as, in fact, its magnetic moment), so unless they are properly computed one cannot really predict the phenomenology of the particle.

Nowadays, the anomalous electron magnetic moment is measured with an astounding precision, at 1.001 159 652 180 730, give or take 280 quadrillionths. The theoretical estimate is also astoundingly precise, and it beautifully matches the experimental precision: the current value is 1.001 159 652 181 643, give or take 764 quadrillionths. If this does not convince you that quantum electrodynamics works, nothing ever will!

Quantum corrections that cause the discrepancy from g=2 arise from the same fundamental processes for all kinds of elementary charged leptons, so (accounting for the different mass of the leptons) the kind of physics insight one gathers from these comparisons of theory and experiments is the same.

Nowadays the attention of HEP physicists has focused on measuring the muon magnetic moment more than the electron one, because there is more room for improvement with muons, and because of the preconception that new physics particles would more likely produce a larger effect on the physics of heavier leptons. The muon anomalous magnetic moment is theoretically estimated at 0.001 165 918 040 +- 510. 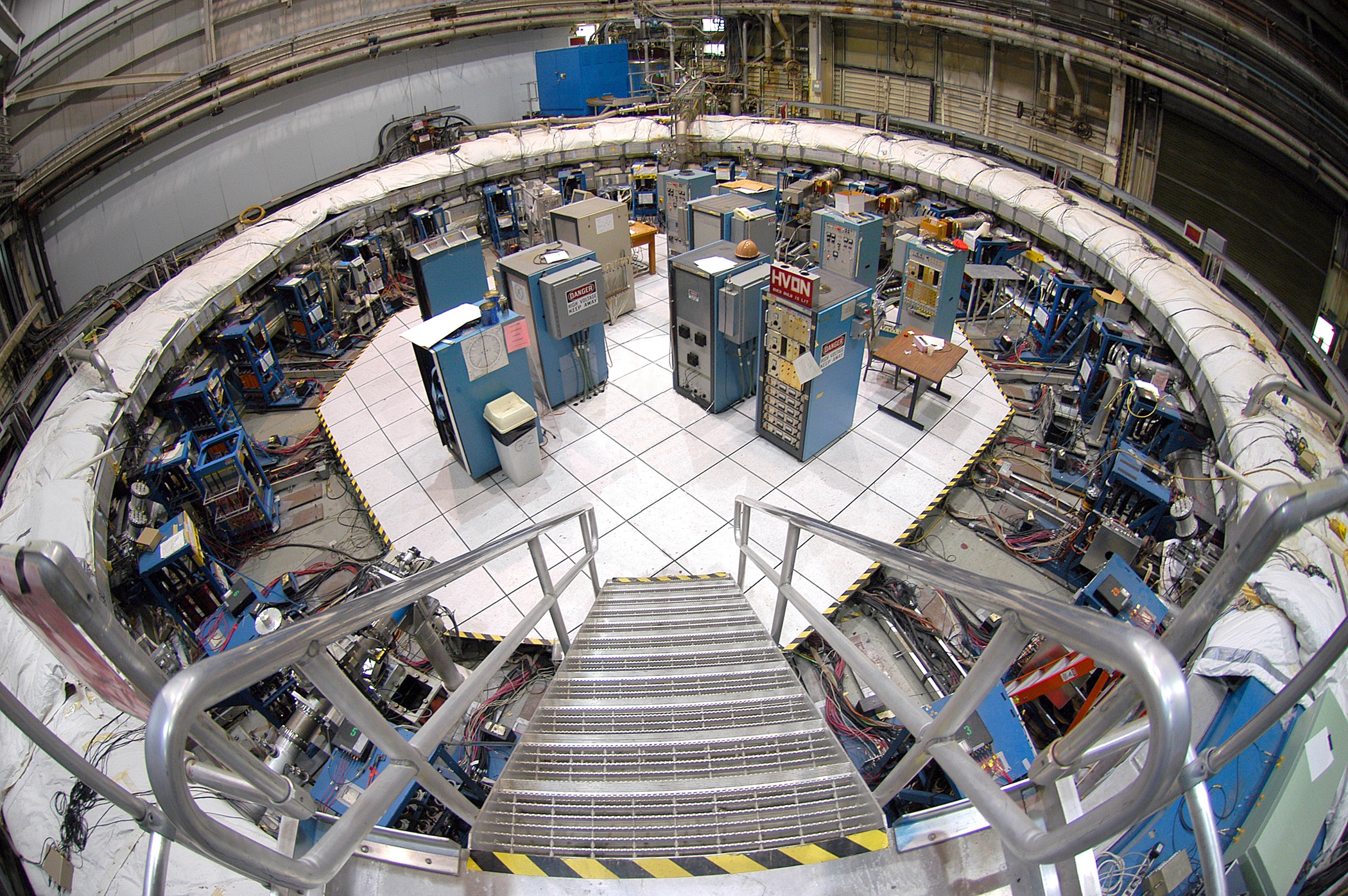 The present experimental determination comes, as already stated, from Brookhaven (see their muon ring in the picture above), where muons were put in a circular orbit and the precession of their spin was carefully measured in a landmark experiment. The result is 1.001 165 920 890 +- 540+-330, where the first uncertainty is statistical and the second due to systematic sources. As you can see, there is a discrepancy of more than three standard deviations between this number and the theoretical estimate previously quoted.

Brookhaven has closed its muon g-2 experiment, but a new one at Fermilab is starting this fall, and it is expected to reach a precision of 0.14 parts per million on the deviation from 1.0: that is three and a half times better accuracy than the Brookhaven determination. That’s is great news, but if the theoretical estimate does not correspondingly improves, the Fermilab effort will largely be wasted – the result could still show a discrepancy from theory, but not one formally discovering new physics in the lepton-photon vertex!

Like the ones of other leptons, the anomalous muon magnetic moment results from the sum of three different contributions: one coming from purely QED effects (loops where the virtual particles are electrons, positrons, and photons); one coming from the intervention of electroweak bosons (W and Z), and one coming from virtual loop corrections involving hadrons. Yes, hadrons: a photon can turn into a virtual quark-antiquark pair, and the quarks, before they disappear back into the original photon, can do whatever they please -they’re virtual! For instance, they may create a hadron resonance.

The graph on the right shows just the simplest Feynman diagrams that “modify” the lepton-photon vertex with QED loops. As you can see, there’s heaps of different virtual processes that need to be considered.

Ah, there’s the rub. The QED and EW contributions are quite hard to contribute, but the real headache for theorists comes from “QCD” ones – ones involving hadrons, that is. The reason is that one needs to consider all possible ways that virtual quarks have to interact, and these can indeed produce virtual hadrons, that are complex, messy objects.

The operation theorists have to do, in order to estimate the virtual hadrons contribution to the muon magnetic moment, is to sum over a multitude of possible reactions, weighted by their respective probabilities and importance. That is, a complex integral. The diagram to evaluate is shown below (left), where the red blob is the stuff they need to compute. Time flows from left to right, and if you concentrate on the top portion of the graph, computing it means “cutting the blob in half”, thereby assessing the rate of “lepton pair goes to hadrons through a photon exchange”.

How messy the integration of that reaction is can be appreciated by looking at the graph on the right above, which describes, as a function of the energy of the process, the rate at which a lepton pair can materialize hadrons. As you can see, at specific energies there are many resonances, particles that the quark-antiquark pairs can produce for short instants.

The trick, and a new proposed experiment

But wait a minute. Aren’t time and space totally interchangeable in the quantum world? Yes sir, they are. So the complicated diagram above can be turned by 90 degrees, and what becomes of a reaction turning leptons into hadrons is a simple scattering process (see below, left), whereby you have leptons on one side, leptons on the other, and the mess occurs in a “space-like” exchange – one which does not give rise to resonances! (Note that time again flows left to right).

The hadronic mess has disappeared by changing space with time, and the integration now does not need to be performed over those complicated hadronic structures, but rather on a dimensionless variable x over which the integrand is smooth (see right function above). However, that integrand must be determined with the help of experimental input, Then, once computed, the result can be easily reconverted to the one for the unrotated diagram.

What needs to be done is to determine from experiment the red curve above, by performing a lepton-lepton scattering experiment. The important region to determine, in the kinematics phase space, is the one where the integrand is large – around the peak of the curve above. This can be accomplished with electron-positron scattering (what is called in HEP “Bhabha scattering”) but unfortunately there are no present-day detectors in operation and suitable beams that can provide that measurement (the closest one is KLOE, a 1-GeV experiment measuring kaons, but the angle of scattering of largest relevance for the measurement is one where KLOE is blind).

So what a group of theorists and experimentalists is proposing to do is to take a muon beam -and there is a suitable one at CERN- and direct it to a light target, where muons can scatter off electrons. The measurement of the differential cross section of that scattering process will provide points in the red curve above, and ultimately, a much more precise determination of the QCD contribution to the muon anomalous magnetic moment! A schematic of the proposed experimental setup is shown below.

In the first schematic above are shown four “stations” impinged by a muon beam coming from the left. The grey targets are of light material -eg. beryllium- to minimize multiple scattering, which is a real enemy here, as you want to determine the exiting angles of the two particles with the utmost precision. Planes of silicon microstrip or pixel sensors (the vertical black bars) should provide accurate measurement of the trajectories of muon and electron, and an electromagnetic calorimeter should identify the electron and in particular determine if its energy is larger than 1 MeV, as this datum is quite important to determine the kinematics (but of course, the full energy measurement helps constraining the kinematics). A muon detector placed downstream would complement the setup.

The strategy to reduce the uncertainty in the hadronic contribution to the anomalous muon magnetic moment is detailed in a paper submitted to the arxiv: 1609.08987. The group of Italians (both theorists and experimentalists) plans to perform a first test beams to design the experiment, and then to start producing the targets and the muon and electron detectors that are needed to precisely determine the kinematics of the muon-electron scatterings.

This should be fun, and I sincerely hope they will succeed in bringing down the uncertainty in the theoretical determination. For g-2 is still the one anomaly (now intended as discrepancy from the standard model) which is the most credible first crack in a theory that has held on for over forty years now, and that we all hope will soon leave room for a whole new world of new physics!

I should not forget to acknowledge Massimo Passera here, for he gave a seminar to propose this experiment in Padova a few days ago, and much of what I wrote above comes from material I took there. Massimo is among the authors of the above cited article, and an active member of the group.

(This article has first appeared on www.science20.com)

I am the scientific coordinator of the AMVA4NewPhysics network. As a member of the CMS experiment at CERN I do research in fundamental physics. I am also an editor of the scientific journal "Reviews in Physics" by Elsevier.

One thought on “Muon G-2: The Anomaly That Could Change Physics”